How I Bought a Second Passport and Why You Should Too


I was born in communist Poland in the 80’s of the last century, less than 200km from the infamous Berlin Wall, that for decades physically and ideologically divided Berlin and the rest of Europe. Going East from the wall you would find countries controlled by the falling, but still dangerous Soviet regime – dictatorial, communist, poor, stripping people of their personal freedom. On the other side of the wall – Western Europe, with thriving capitalism and consumerism, recovered from WWII thanks to hundreds of billions of dollars (in today’s value) which poured from the United States as part of the “Marshall Plan”.

I was extremely lucky to have a big family in the “rich Europe” part and I enjoyed regular post deliveries of sweets and clothes. At the same time, my family situation made me conscious of the enormous inequalities between the life of Polish and German teenagers. I would spend hours staring at old “Quelle catalogs” – sent by my German aunt, 1000 pages thick, mail-order magazines, that looked basically like someone turned Amazon into a printed book. Not only could my parents not afford all those fancy toys, clothes, or electronic gadgets, but we also wouldn’t be able to buy them even if I had money. You just couldn’t get anything in the country, shops were empty. You could get stuff like butter, milk or chocolate only in limited amounts fixed by the government. I had to deal with all that because I was born those damn 170km too far East of the Berlin wall. That was the first time I experienced geopolitical unfairness of the world.

In communist Poland, if you wanted to get a passport, you had to go through an extreme vetting process, done by the polish version of KGB. You had to apply numerous times until getting an approval, that usually depended on giving a bribe or information about your “neighbor’s suspicious anti-government activity”, and even if you got the passport, you could only physically have it with you for the time of the travel. You would have to give it back after you came back.

All that changed when Poland miraculously abolished communism and joined the European Union, but even then we were still “the poor brothers from the East”. In Western Europe airports I always had to go through additional questioning by immigration. Getting a U.S. visa was nearly impossible. While working on my startup in the early 2000s, I got into a Silicon Valley incubator, but I couldn’t go because I was refused the visa. That was the second time my polish citizenship killed my dreams. Three times a charm is what they say. It took me one more experience, a much more powerful one to finally do something about it.

Fast forward to 2017. I had been living in Nigeria for a couple of years where I’d become a resident, opened a few companies and started paying taxes there. I co-founded Jumia Travel, that quickly became one of the biggest hotel booking sites in Africa and HotelOnline.co, a leading hospitality software company on the continent. I had my ups and downs, but I was confident of the bright future of Nigeria and the business opportunities it presented for entrepreneurs like myself. Great opportunities come with great risks though. In what later turned out to be a planned takeover of my company and blackmail, I had all my assets seized and my bank accounts frozen. All of it was done by an order issued by Nigerian police officers, corrupted by my local business partners that decided to get rid of me. Like in a shitty Hollywood B movie, I was quickly given an offer. A shady individual told me that all my problems will go away, all I need to do is to send a symbolic sum of a couple of hundred thousand dollars to a specific bank account.

But just like in a Hollywood movie, the good guys don’t negotiate with the bad guys. I had nothing to lose, so I sued the Nigerian police. Yes, you read that right. What’s even more amazing, I won. That was one of the “faith in humanity restored” moments. I’m probably the only foreigner in the history of Nigeria to sue its police and win. And to be still alive. The court ruled illegality of all the actions by police and even set a symbolic sum of ten thousand dollars to cover my “moral damages”. The police haven’t paid yet and I’m still trying to figure out who I should call for help to get my “win money”.

I came out of my Nigerian blackmail adventure safe and sound, mostly because of tons of luck. It could have been much, much worse. The experience made me, however, reach my threshold. It showed me how fragile your position, and how illusory your sense of safety can sometimes be. Especially when you live and work in countries with a struggling democracy and economy. I’ve decided that I need to move my assets, tax residency, or even citizenship to a country, where abuses like that can’t happen, where the law is respected and corruption is marginal. I couldn’t count only on my homeland – Poland, that in the last couple of years has become dangerously authoritarian and one of the most expensive countries in Europe in terms of taxes. And call me paranoid, but with the global political dynamics, the growing tensions between the West, Russia, China, and Europe’s immigration challenges, the Old Continent’s future doesn’t look that bright. In 1939, there were still people in Poland that would have called you crazy if you had said Hitler could invade us.

I needed a safe harbor, a plan B. And on top of it, having 2 passports is kinda cool.
I had always thought that getting second citizenship by paying money can only be obtained in some shady ways and that it must be extremely expensive. And by extremely, I mean millions of dollars. What I found out was something totally different. A lot has changed in the last couple decades. Many governments started treating their citizenship as a commodity. The first country that offered its passport for sale was Saint Kitts and Nevis in 1984. Today already over a dozen nations offer citizenship – including five Caribbean island-states, Vanuatu, Jordan and, within the EU, Austria, Cyprus, and Malta. Programs have by far become more affordable. Passport of Vanuatu, a beautiful, peaceful republic on a South Pacific Island, starts from $ 70k and you can even pay in Bitcoin.

Let’s be honest, which country wouldn’t want to invite more lawyers, doctors, engineers, entrepreneurs and other successful experts in their fields to their land, so they invest and pay their taxes there? There is however a vetting process that keeps the crooked types out, your finances need to be legit and you even have to go through a health check. No place for sick people in the paradise. There are many advisory companies licensed by those governments that manage the whole application and investment process. I went with the one that had the coolest looking website (obviously) and that seemed most professional out of the few I spoke to. They had also been on the market for more than 8 years already. In the startup world that’s almost like an eternity.

The hardest part of the whole process was choosing the country to get the passport of. You need to take into account their geography, as you will want to visit it from time to time and who knows, maybe make it your base. What’s crucial is their tax system, quality of education, if you’re planning kids in the near future, and the strength of the passport. My polish one allows me to travel freely in Europe but I wouldn’t mind having to apply for fewer visas when traveling to Asia, Africa, the Latino countries, and the great “Merica”, of course. I chose one the Caribbean countries. I fell in love with their zero income and inheritance tax. I was allowed to keep my polish passport and have dual citizenship. The island itself is just a stone throw away from the Dominican Republic, where all of my girlfriend’s family lives. And most importantly, this country’s significant part of revenue comes from foreign investors, offshore banking and payment processing companies. The government has a great opinion among international entrepreneurs and the likelihood of becoming a victim of criminals, like it happened to me in Nigeria, was significantly lower. Instead of buying a property (minimum of $ 260k investment) I went for a cash donation to the government fund, which was less than half that price. It was much cheaper, but I will never see that money again. With the Real Estate option, I could sell it after 5 years and hope for a nice ROI.

After choosing the country, it was time for the paperwork. A visit to the doctor, the bank, the notary, the sworn translator, couple signatures on the application prepared by the advisory firm and I was good to go. The whole process was pretty straightforward and if you ever opened an offshore company then you know what I’m talking about. It took me 2 weeks to collect all the necessary documents and another 3 months to get a shiny new, blue passport that allows flying to more than 120 countries (including EU) without a visa.

I got myself a beautiful and peaceful place to pay taxes and move to if the need comes.
A plan B for safety, peace of mind, and a cool thing to show off, of course. 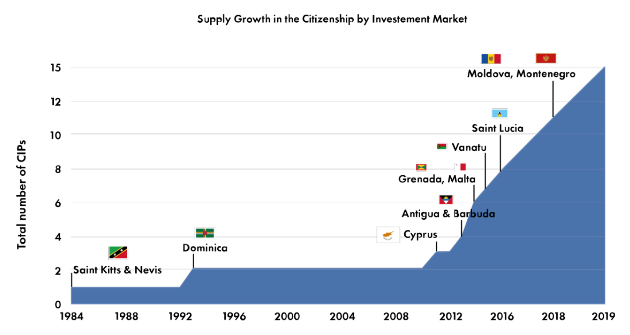 Did it end there? Of course not. I wouldn’t be myself if I didn’t start thinking how to build a business around, what seems to be a booming industry. The Citizenship by Investment (CIP) market is estimated at $ 20bln annually, which is twice as big as the global private yachts market. It’s growing by two digits in percentage every year and it’s just the beginning. But it’s an industry that hasn’t figured out yet how to leverage on the digital revolution and online marketing. The biggest players operate more like lawyers, less like growth-oriented, technology-driven companies. That was my aha moment. I decided to invest in the very company that helped me. Now I can help others and democratize the world. Because it’s not your fault where you were born.